It all began in March 2008 when I was passing through Joburg on my way from Smithfield, home of the Platteland Preview, to Berlin. Sharlene Khan, Fouad Asfour and I were having a drink somewhere nice in Melville and in spite of Smithfield being a far cry from home town Joburg, we had heard about the very first JoburgArtFair opening in 6 weeks time in $andton…

That was the moment when an idea began to wiggle and stretch….. I flew off whilst Sharlene and Fouad and their colleagues of the Dead Revolutionaries Club got to it: they found a great venue through Benjy Francis – the old Potato Shed of the original Joburg Market in Newtown. They came up with the title for the show: Esikhaleni – Spacial

A year later we were pondering how and where. Theartistformerlyknownas Sharlene Khan and Fouad Asfour had been approached by Karin Reinprecht, one of the first to buy into Jonathan Liebman’s brainchild- Arts on M
ain which has since grown into this inner city peeled-egg which he called The Maboneng Precinct. Karin said: “why not put your dead elephant sculpture in my space as the 2009 Joburg Fringe!” Now, Karin’s space was small, and the old question came to mind: “How do you get an elephant into a Mini?” Jonathan came up with the perfect solution to put it upstairs in what is now the Event Space, and 6 of us with Garfield Taylor directing, built my sad dead beast in 5 days… 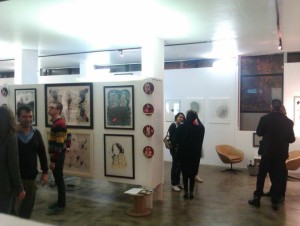 And so it began. Every year since then the event has grown with more artists participating – run on a Blikkiesdorp budget (shoestring), guts and perseverance. 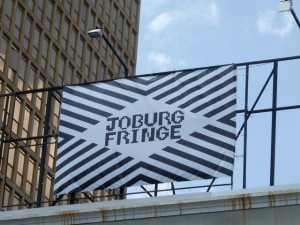 Run on Joburg energy and a Blikkiesdorp budget.